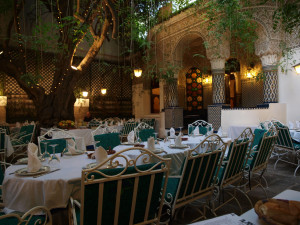 In the strict sense, FDA requirements for gluten-free claims apply to only packaged foods that are subject to FDA labeling regulations. However, FDA stated the following in regards to restaurants in the preamble to its final rule on gluten-free labeling (see 78 FR 47153 at 47173, issued 8/5/13): “with respect to restaurants, FDA guidance suggests that any use of an FDA-defined food labeling claim (e.g., “fat-free” or “cholesterol-free”) on restaurant menus should be consistent with the regulatory definitions.”

Further, both FDA regulations at 21 CFR 101.13(q)(5) (see http://tinyurl.com/lfvknn7) and Chapter IV of FDA’s guidance document titled Guidance for Industry: A Labeling Guide for Restaurants and Other Retail Food Establishments Selling Away-From-Home Food initially issued April 2008 (see http://tinyurl.com/mngrt4j) reiterate the agency’s position that restaurants should not use an FDA-defined nutrient content claim for foods sold in restaurants unless those foods meet regulatory requirements for the claim. A gluten-free claim is an avoidance claim and FDA has publicly expressed its opinion (in the Federal Register and in a guidance document) that it takes a similar approach to gluten-free claims made for foods sold in restaurants.

Consequently, if restaurants or other retail food establishments wish to make “gluten-free” claims (or the synonymous claims “no gluten” “free of gluten” or “without gluten”) for any of their menu items, these foods should meet all of the requirements FDA has established for a food labeled gluten-free, including not containing 20 parts per million or more gluten, whether or not the presence of gluten is due to accidental cross-contact occurring in the kitchen. If restaurants cannot ensure that the foods they prepare fully comply with FDA’s definition of gluten-free, restaurants should not refer to their foods as being “gluten-free.” State and local governments play an important role in oversight of restaurants and other retail food establishments and are responsible for conducting on-site inspections of those facilities to help ensure the safety of foods served to the public. FDA expects to work with their State and local government partners with respect to gluten-free claims for foods prepared and sold in restaurants.  FDA will consider enforcement action as needed, alone or with other agencies, to protect consumers.

In addition, consumer advocacy/watchdog groups, other retail food establishments, manufacturers of foods labeled gluten-free, and consumers can play an important role in preventing restaurants from incorrectly using gluten-free claims for their menu items. For example, if a restaurant manager confirms that a menu item bearing a gluten-free claim is made with an ingredient prohibited by FDA regulations on gluten-free food labeling, or if any persons sensitive to gluten become sick after consuming restaurant foods claimed to be gluten-free, it is important that these cases be reported to both the overseeing state agency and to FDA (see Consumer Complaint Coordinators listed by state at http://tinyurl.com/k7cfrp2. It is believed that conducting outreach to restaurants and other retail food establishments to help educate them about FDA’s definition of gluten-free can be an effective tool to avoid inappropriate uses of the term gluten-free for foods sold by those facilities.

Did you know that "gluten-free" food can contain dangerous amounts of gluten?

Subscribe to Gluten-Free Watchdog today and find out what might be keeping you from feeling your best.